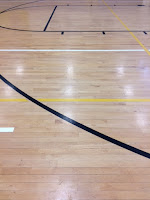 This year, I've had a wide range of experiences with substitute teaching.  Look for a series on this next month as I finish up the year.  Yesterday, I taught gym class.  Right up there on the list with subjects I never thought that I would ever teach, including Algebra.   It's the end of the year, and there aren't as many assignments available, so I thought, "Why not?"

As I looked through the plans for the day that the teacher had typed up, I came across a worksheet on the male reproductive system.  "No!"  I thought quickly.  "No, no, no, no, no! They do not seriously expect a substitute teacher to teach this, do they?"  I quickly looked through the plans and discovered that it was a personal learning day in health class, so they had to read about it on their computers and fill out the worksheets on their own.  "Ok, I can do this," I thought to myself. As long as they don't ask any questions...

The ironic thing was that I had to break up two couples from making out during the class where they were supposed to learn about the reproductive system.  Insert faceplant emoji here...

I went on to teach aerobics and stretching and toning class, both of which involved a worksheet.  As the regular teachers like to say, "You just have to keep them from killing each other."  Ok, I can do that...

The whole experience brought back so many memories of my own gym class days.  Just walking out onto the gym floor was like  Déjà vu.  All of the repressed memories came flying back.  The awkwardness of 7th grade, in which we had to change our clothes and take showers and learn to put on deodorant.  The 3rd grade square dancing, during which we had to touch boys' hands and risk being infected by cooties.  The Maypole dances with streaming colored ribbons.  The roller skating around and around the gym.

So. Many. Memories.  For me, a shy, overweight, non-athletic female, most of my school years were spent dreading gym class.  I did like the roller skating, the occasional volleyball game, and the tennis matches.  I had a hate-hate relationship with the pull up bar and I despised having to hit the ball and run the bases during softball.  I couldn't run the mile for the presidential fitness test and push ups only eluded me.

Many of the other students loved gym class.  A chance to get away from academics and let loose while playing their favorite sport.  I think of one girl in particular every time I think of gym class.  She was the most athletic person in our school, and she was good at every sport.  She played hard, she played rough and she enjoyed every minute of it.  I was the polar opposite.  I was counting the minutes until gym class was over.  I was the academic type, and prayed constantly that gym class wouldn't bring my grade point average down in my run for class valedictorian.  The semester on track seriously questioned this as I could not run to save my life and I couldn't jump more than a foot.  Thankfully shot put helped me out a bit with my grade.

My funniest memory to look back on was during our badminton section.  My nemesis (later turned good friend) Nate was playing next to me and as he went to swing the racquet to hit the shuttlecock, the racquet got stuck in my very long hair. I screamed and probably punched him in the arm.  "My hair!"  It took the rest of class to untangle my hair and my pride from his racquet.

My best memory of gym class happened during the last semester of my senior year.  I have very bad recollections of the male gym teacher at our school.  He was harsh and demanding and favored the athletic students in the class.  I always tried to stay away from him as much as possible.  Senior year, we were playing soccer (a sport I actually liked), and as we approached the goal, I made an assist to the gym teacher and he scored a goal!  Afterwards, he came up to me and said, "Nice assist!"  I will never forget those words, as they were the only positive ones I'd heard from him in four years.

It's amazing how a thing like teaching gym class will bring back a flood of memories.  What do you remember about gym class?