You Had Me At Kayak

I met my husband in South Carolina.  We spent most of our courtship dodging alligators and ducking snakes falling out of trees.

I won't go into how exactly we met.  (I'll leave that for another memoir blog!)  But, I will say that about a month after we met, my husband bought me a kayak.  I have to say that I freaked out a little bit at first.  I mean, this was a huge gift for someone whom he had really just met and had only been talking to for about two months or so.  I wondered what I should do?  I finally decided to accept the kayak and then if we happened to break up, as many relationships do, I would simply give him back the kayak.  Sounds good, right?  Well, we never broke up. 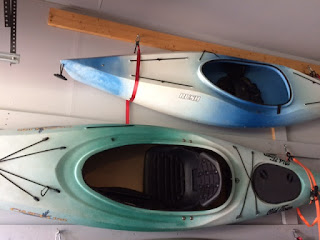 Turns out, he had me at kayak.  (Or so he likes to brag!)  Here is a picture of our two kayaks.  Mine is the blue one at the top.  South Carolina was a gorgeous place to live.  The winters were a little boring, but we were lucky to have met in the springtime when the world was at our fingertips as far as outdoor activities go.  We could walk the boardwalk, hang out at the beach, go for a motorcycle ride or do what we liked best at the time, go kayaking on one of the rivers.

It turned out that kayaking was the most relaxing things I had ever done.  Amidst the exhausting demands of ministry (I was a full-time youth director at the time), I needed an outlet to unwind.  We would paddle around, exploring the low country of the Carolinas.  We would time the tides just right so we'd never have to paddle upstream against the tide.  (Smart hubby!)

It was beautiful!  The trees in the background with Spanish Moss hanging low, the old Southern plantation homes along the river to gaze at as we paddled.  My blood pressure dropped a few points each time we pushed off.

We did have our fair share of  funny incidents.  Including the times when we'd see a small alligator pop up out of the water, or just see his eyes gazing at us.  (Supposedly, according to hubby, they are scared of kayaks due to the Native American boating traditions.  I don't know if he made that up to make me feel better or not!)  A time or two, we also had to dodge a snake falling out of a tree.  Needless to say, I never got out to do some swimming in the water!  I also dropped hubby's sunglasses into the creek at one point, which I thought were a cheap pair.  He told me later that they were his new designer-brand glasses.  (Oh, young love!)

Kayaking turned out to be what I liked to call my "Three Hour Vacation."  I have always wanted to have that inscribed on the side of my kayak.  It's the most relaxing three hours I can think of.  The inscription reminds me of one of my favorite things to do near water--check out the boat names.  I've seen some funny ones over the years, including a gigantic boat in Annapolis named the "Minerella" with a literal helicopter on the top, aptly named the "Glass Slipper."  I've seen many named after women or places or funny sayings.  Doing a Google search, I found these beauties:


She Got The House
Seas The Day
Fishizzle
Reel Therapy
Unsinkable II
Taco The Town
Ctrl+Alt+Delete
My Other Boat Is Also A Boat
FahrFrumWurken
Bacon In The Sun
Sea-battical
Knot For Sail
Liquid Asset
Row Vs. Wade
Missing Peace
One More Toy
Grounds 4 Divorce
Sails Call

Many of these could tell their own story if we let them.  My favorite that I saw recently is below.  Life's A Journey.  Whether we're courting our future husband or just on a three-hour vacation, it's important to take time out from life to rest, relax and enjoy someone's company on a sea-battical.  Just bacon in the sun... 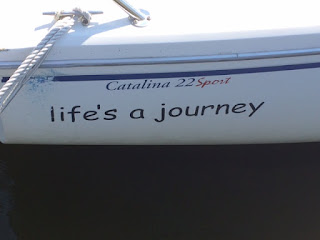