Jealous Of The Thankful


Thanksgiving morning I found myself lying on the driveway underneath the bumper of my car.  The temperature was 12 degrees and I was holding a heat gun and a hammer.  Inside, the Macy's Thanksgiving Day Parade was starting, and I wasn't feeling very thankful.

Let's back up a little. This Fall has not been kind to my car.  In the last month and a half, I have had a rock hit my windshield, causing a dent in my line of sight, a flat tire and then, out of nowhere, as I was driving along the road to preschool, a huge branch dropped off of a tree at the exact second that my car drove past it, smashing my windshield and denting my hood.

But life wasn't done with my car...fast forward to Thanksgiving Day and the popping out of a dent in my bumper.  You know how people nickname their cars?  Well, my car's new nickname is "Job."  No, not the pronunciation of the word similar to what you go to 9-5, Monday through Friday.  No, the nickname of Biblical proportions.  As I said, Fall, life, or something else has had it out for my car.

In the midst of this craziness, enter November.  Each November, a number of my friends take up the lovely practice of posting each day on Facebook something that they are thankful for.  It's a beautiful devotion that I have done myself a couple of times.  It's a reminder to think each day about what God had done in our lives and to be reminded of all of the many, many things we have to be thankful for.  This year I decided not to do it.  For one, I was just busy this year taking care of my car problems and dealing with life in general.  But, last year as I was writing about all the many things I was thankful for, I tried to look at it from an outsider's perspective.  I realized that it almost felt like bragging.  Look at me and all these wonderful things I have to be thankful for.  Someone reading it might be single and be sad that they aren't married.  Someone struggling with infertility may be frustrated seeing my thankful posts about my kids.  I realized that it might be hard for someone to look at what I'm thankful for and wish they had some of those things.

Oddly enough, the reverse happened to me this year.  As I was going through my car problems and child-raising issues and hubby-working-all-the-time challenges, I began to read the thankfulness posts of my friends and acquaintances.  I found myself wishing I was thankful for those things too.  The kids with wonderful grades, the date nights, the kids who invited Jesus into their hearts at 18 months, the time and money to travel the world.  That green-eyed monster reared its ugly head.  So much so that I actually considered emailing some of the Facebookers and pointing out that their posts might be inadvertently hurting other people who aren't able to be thankful for those things this year.

In that moment, I had to stop and check myself.  I was about to complain as Job did in chapter 10 verse one, "I loathe my very life; therefore I will give free rein to my complaint and speak out in the bitterness of my soul."  I realized that if I did, in fact, give voice to my complaints that I would be allowing that jealousy to poison my soul and leave it full of bitterness.  I realize that it wasn't really the Facebook posters' problem, it was my own.  My own insecurities about my parenting, my frustrations with my children and their reading levels and behaviors and the comparison of them to other kids. My anger about my car problems, my busyness, and the crazy level that was rising in my life had contributed to this jealousy and came to a head on Thanksgiving morning as I lay under the bumper of my car.

Ephesians 4:31 urges me to get rid of this bitterness.  All bitterness.  This has been a struggle for me in several areas, and I am learning to release it to God because it's too heavy to carry around.  I don't need it in my life.  When I need to hear things, God speaks them to me. Today, Hebrews 12:28 reminds me that "We are receiving a kingdom that can't be shaken.  So let us be thankful.  Then we can worship God in a way that pleases him.  Let us worship him with deep respect and wonder."  (NIRV)

Let us be thankful.  This is not a command but an invitation.  Thankfulness is a state of being, a state of mind in which we switch our brains from what we want, what we wish were the case, what we are jealous and sad about, to that which is bigger than ourselves.  No matter how much the Enemy tries to mess with us and literally throw rocks at our cars, it doesn't matter, because we are receiving a kingdom that cannot be shaken.  Nothing we do, nothing that happens to us on a daily basis, can shake the Kingdom of God.   For this reason, let's remember to "give thanks in all circumstances" as 1 Thessalonians 5:18 reminds us.  In all circumstances, God is still God and his Kingdom is firm and steadfast.

If we do these things, if we live thankful lives, then we can worship God with the right frame of mind. We can worship God with deep respect and wonder.  The only right way to do it.  God is worthy of all of our respect and honor, just because he's God.  Not because we are having a great day, our kids are doing well and we got a great parking spot at work.  No.  Because He's God.  Because he's God, we have to look at him through eyes of wonder.  We may not understand what in the world is going on in our lives right now, but we can know that the God of Wonder is walking with us through it and he's calling us to a deeper understanding of himself.

The Message version of Hebrews 12 goes on to say that God is not an innocent bystander.  He's actively cleaning house, torching all that needs to burn.  He won't quit until it's all cleansed.  Today I've been reminded that God needs to torch the jealousy in my life and replace it with a deep sense of awe and wonder.

What in you needs to be cleansed and healed in order to draw on the infinite wonder and majesty that is God? 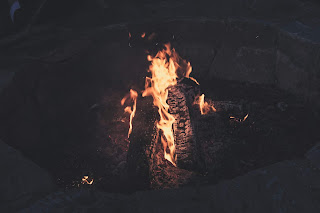