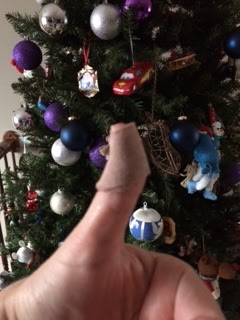 The other day I cut my thumb pretty badly.  I'd been working in the kitchen to cook a meal for my family while also thinking about the million and one other things I needed to do.  I quickly grabbed the broccoli, a cutting board and a knife.  I sliced it quickly, not really paying too much attention.  Probably thinking about my Christmas card photos.  I looked down and realized I had not only sliced through the broccoli, I'd sliced through my finger as well.

My first thought was annoyance.  I'd have to stop what I was doing to deal with my cut finger.  Ain't nobody got time for that! Especially at Christmas.

I dealt with the cut and continued to cook dinner.  It was only later when I realized that I have two similar scars near this cut.  I couldn't believe it when I saw that.  I have cut this same thumb three times in almost the exact same spot!  (One of them was an unfortunate incident with a muffin pan.  Don't ask.)

It made me realize how much we really aren't paying attention in life.  We are so often busy worrying about the next thing or trying to multi-task that we forget about the thumb right in front of us.  (Sometimes literally!)